The circular top veneered with segments of flame mahogany over a scalloped frieze with gilt bronze balls. The triform base with turned central support with carved and gilded feathers and acanthus leaves flanked by three giltwood cherubs, raised on lion paw feet.

The Counts Von Schonburg-Glauchau are one of the oldest aristocratic families of Europe and for several hundred years have appeared in the history of Southwest Saxony, traceable back to the 12th century. Their ancestral castles were erected at this time on a pre-existent fortification, and were later remodelled into a larger noble residence, Hinterglauchau. Forderglauchau was built in the 15th century, as part of the same complex as Hinterglauchau.
The territoy of Schonburg overlapped into Saxony, Bohemia and eventually Thuringia and all of it fell under the jurisdiction of the Holy Roman Empire of the German nation. Consequently, the Lords of Schonburg had different statuses according to their subsequent jurisdiction. However at his coronation, in 1790, Leopold II rasied the status of the Waldenburg-Hartenstein to the status of princely House.
Over the centuries, several generations assembled their collections at the castles of, distinguished by a significant number of commissions. However the properties of various branches were confiscated in 1945 under the Communist Land reform of East Germany. At this time, Joachim, Count of Schonburg-Glauchau was the nominal successor. Soviet occupation troops arrested him, expropriated his properties, and he and his family were deported. However, in 2011 the castles of Forderglauchau and Hinterglauchau were restituted to their rightful owners under the Compensation Act.

The Lordship and Castle of Wechselburg, where this table lived, was owned by the House of Schonburg from 1546 to 1945. It is documented that during the first quarter of the 19th century, many alterations were made to the interior of the castle with several purchases of furniture. Furthermore, records reveal that Count Alban von Schonburg who inhabited the castle at this time made many purchases from Leipzig. Interestingly, the trade label attached to the table denotes its original location was in the workshop of Johan Augustus Kriemichen, at Haynstrausse No. 345, Leipzig. His stamp translates:
"Joh.Aug Kriemichen, Leipzig.
With a selection of fine solid mahogany pieces and sumptuous rooms and entire floors, you can fully enjoy the latest fashion at reasonable prices.
Haynstrausse No. 345, The Gold and Blue Star." 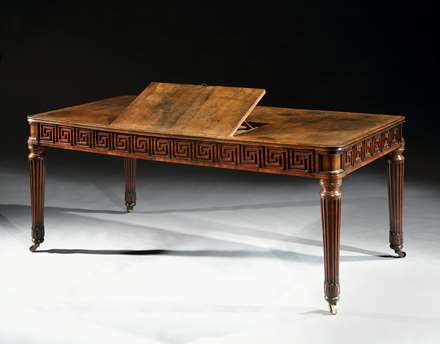 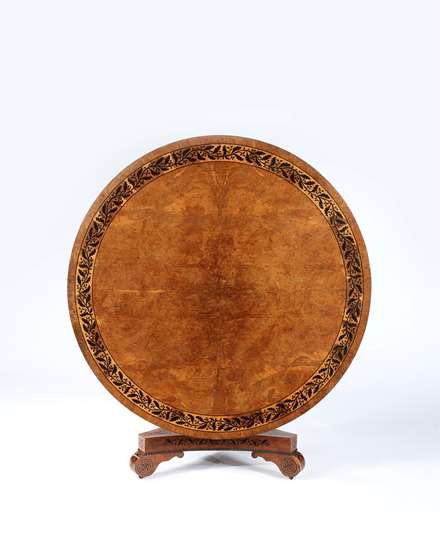