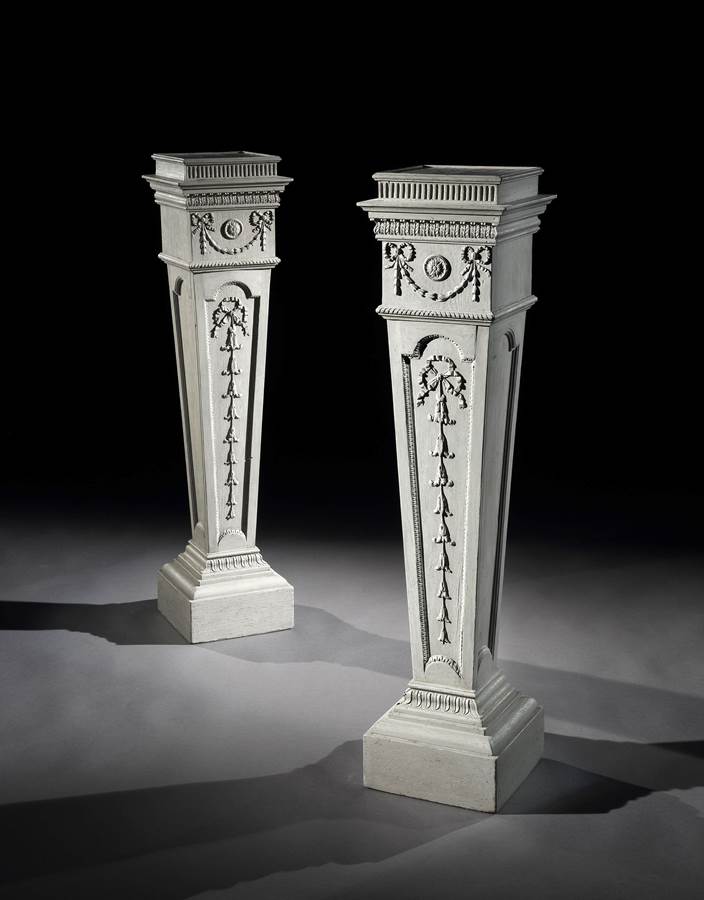 These magnificent pedestals are closely related to a pair designed by Adam for Byram Hall, West Yorkshire in 1780 which can specifically be seen in the similarities between the swags and bell flowers tied with ribbons. Another pair designed by Adam were supplied for Sir Lawrence Dundas for his house at 19 Arlington Street, now in the Victoria and Albert Museum, London.

Robert Adam (1728-1792) was one of the most important British architects, interior designers and furniture designers working in the Neo-Classical style. He was the main force in the development of a unified style that extended beyond architecture and interiors to include both the fixed and moveable objects in a room. He incorporated design ideas from ancient Greece and Rome into his forms and decoration. He was the leader of the first phases of the classical revival in England and Scotland from circa 1760 until his death in 1792. His famous London houses include Kenwood House, Osterley Park and Syon House.

Born in Kirkcaldy, Scotland, Robert Adam was the second of eight sons of the established architect William Adam, and followed him into the family practice. In 1754 he embarked upon a ‘Grand Tour’ spending five years in France and Italy visiting classical sites and studying architecture under Charles-Louis Clérisseau and Giovanni Battista Piranesi. Whilst in Rome, he became acquainted with the work of the pioneering classical archaeologist and art historian, theorist Johann Joachim Wincklemann.

On his return to England in 1758 he established his own practice in London, on Lower Grosvenor Street, where his brother James joined him. It was from this site, before moving to the Adelphi Buildings, a block of Neo-Classical buildings designed by the brothers near Westminster, that Adam secured work from over 350 patrons. Many commissioned him to work in both London and the country throughout his career. As a designer of furniture too, Adam played a leading role developing furniture style that was intended to harmonize with the rest of the home. One of the outstanding features of an Adam interior is that everything, even the smallest detail, was part of the unified scheme.

The ‘Adam Style’ and his theory of movement in architecture is based on his studies of antiquity and he became one of the most successful and fashionable architects in the country. Although classical architecture was already becoming popular, Adam developed his own style, which was influenced by classical design, but that did not follow Roman architectural rules as strictly as Palladianism. Adam held the post of Architect of the King’s Works from 1761 to 1769.

A Regency period giltwood stand in the manner of Thomas Hope