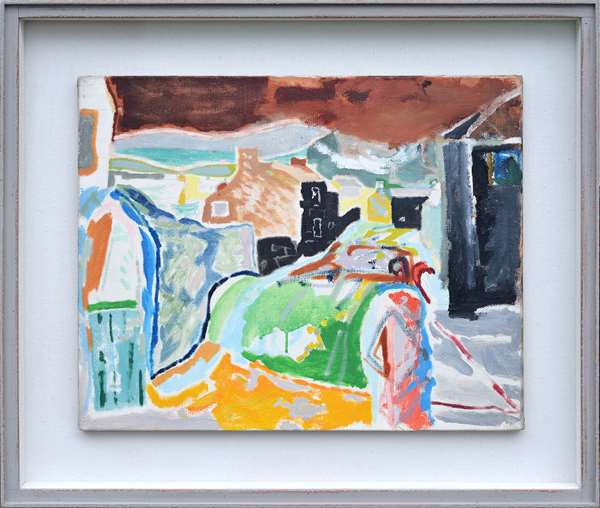 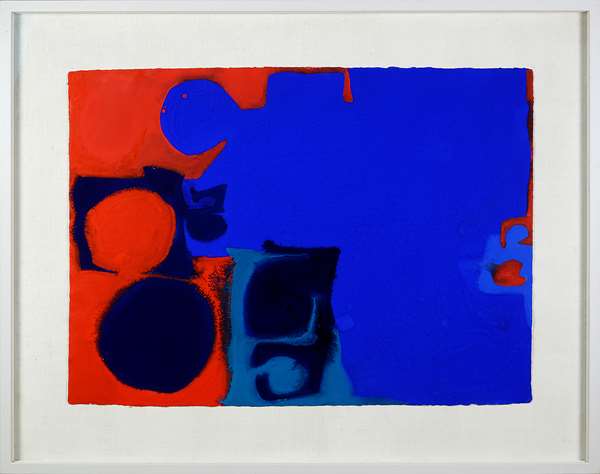 Patrick Heron (1920-1999) was born in Leeds but moved to Cornwall with his family in 1925 where his father set up a garment factory in Newlyn Harbour. This blossomed into Cresta Silks in Welwyn Garden City, Hertfordshire, where the family had moved in 1929, and where Patrick, still a schoolboy, made some remarkably successful designs for the fabrics. In 1937 he became a part-time student at the Slade School of Fine Art in London but he never felt it gave him much. During the war he worked as an agricultural labourer in Cambridge and Welwyn Garden City for four years before becoming an assistant at Bernard Leach's Pottery in St Ives, Cornwall. In 1945 he married his childhood sweetheart Delia Reiss. In her he had found the perfect companion, whose feeling for art and nature perfectly matched his own. Beautiful and intelligent, she was utterly committed to his work but fiercely independent of spirit. In his own words, she was his "best and most essential critic". They lived in Holland Park, London, but for the next seven years they spent every summer in St Ives at a house on the sea wall. Georges Braque and Henri Matisse influenced Heron’s early work, but in the mid-Fifties he developed an abstract style using unusual colours and intricate patterns. His work is devoted to analyses of natural forms and colours. From his abstract works, particularly those made up of horizontal or vertical stripes to his softer-edged shapes, he regularly uses colour to express the pleasure of sight as one of the most important human senses. It was sometimes remarked that Heron got by on his colour, that he was no draughtsman. This was untrue. His drawing was as incisively accurate as that of Ben Nicholson, the friend from whom he inherited the studio overlooking Porthmeor beach at St Ives. After working as art critic on The New Statesman and Nation he started a teaching job at the Central School of Arts and Crafts in London in 1953 and in 1956 moved to Cornwall settling at Eagle's Nest in Zennor. He was art critic for the New English Weekly for two years before having his first one-man exhibition in 1947 at the Redfern Gallery, London. Heron was awarded the Grand prize at the second John Moores Liverpool Exhibition at the Walker Art Gallery in 1959 and the Silver Medal at São Paulo Bienal VIII in 1965. Exhibitions include the Redfern Gallery, London, who gave him his first one man show in 1947, the Bertha Schaefer Gallery in New York in 1960 and Bonython Art Gallery, Sydney in 1973 and the inaugural exhibition of the Tate St Ives in 1993. In 1998 he was given a retrospective at the Tate Gallery, London. His work can be found in many important public collections such as the Tate Gallery and the National Galleries, Scotland.