Keith Vaughan (1912-1977) was born at Selsey Bill, Sussex. He worked in the Lintas advertising agency from 1931-9, painting in his spare time. In 1939 he left the agency to pursue a full time career as an artist. Having had no formal art training, he was self-taught as an artist, and was influenced by Colquhoun, Craxton, Sutherland and Minton, the latter two he met when working as an interpreter in a POW camp in Yorkshire. Vaughan taught at Camberwell from 1946-8, the Central School between 1948-57, and the Slade School from 1959. In 1959 he was Resident Painter, State University of Iowa. He served on the Arts Council Advisory panel, became an Honorary Fellow of the RCA in 1964, and CBE in 1965. Commissions include murals for the Festival of Britain in 1951 and a series of lithographs for Une Saison en Enfer. His first solo exhibition was at the Red & Lefevre Gallery in 1944, where he continued to exhibit until 1952, thereafter showing at leading London galleries, in the provinces and abroad. Retrospective exhibitions include those at the Whitechapel in 1962, and the University of York in 1970. He was represented in many group exhibitions and is in many public collections, including the Tate Gallery. Vaughan's artistic themewas constant: the male nude in the landscape, although, the images can be highly abstracted, such as in the present example; the palette is unmistakeable, however. Vaughan's journals, which have been published, give a graphic insight into his often vulnerable, obsessive and sad private life. 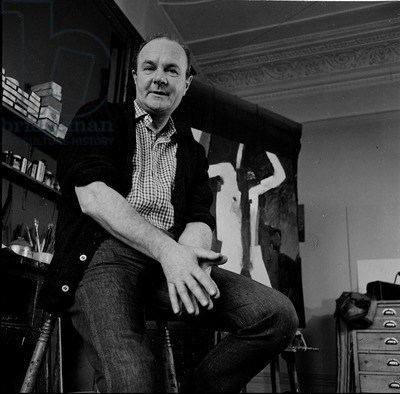