Robyn Denny was born in 1930 in Abinger, Surrey, where his father was an Anglo-Irish clergyman. He was rebellious from an early age and perceived that his decision to become a painter would allow him to practice his waywardness professionally. After a brief stint in the Royal Navy (where said rebelliousness got him into detention), Denny attended St Martin’s School of Art (1951-54) and the Royal College (1954-57). Independent, constantly questioning and intensely urban, Denny immersed himself in contemporary city culture, making it the foundation of his work. After graduating from the RCA in 1957 he first showed with the pioneering Gallery One and then with Gimpel Fils. In 1960 he helped organize the first Situation Exhibition, an important landmark in British abstract art and a peer-group exhibition of large, resolute abstracts which took place at the RBA Galleries. In the mid-60’s, Denny’s paintings were often in muted blues, greys and browns, and with sharply abutted planes of colour crystallising into a geometrical figure that locks the gaze. These works, somewhat surprisingly, are in fact the product of a reaction to the British tradition of landscape painting. This style of painting, which dominated his 1973 Tate retrospective, began in the 50s, when he was a tachiste – a European variant of abstract expressionist where paint is variously thrown, moved about with a stick, shoved through stencils and set on fire by the self-styled "fully fledged abstract artist" – and developed from there. By 1964, Denny was with the ultra-modern Kasmin Gallery and enjoying considerable commercial success at home and abroad. He not only represented Britain at the 1966 Venice Biennale, and had the aforementioned Tate retrospective in 1973 (at the time, he was the youngest artist so to be honoured); he also held eight solo exhibitions in Europe alone in 1974. At the end of the 1970s his work had been acquired by almost every important art institution, including the Tate, which has more than 80 pieces, and the Museum of Modern Art, New York. During this period he was also teaching at several schools both in the UK and abroad. In the early 1980’s Denny lived in Los Angeles, but returned to London in 1986. He had his last solo show in 2001 and after that spent more and more time in his beloved house in France where he passed away in May 2014. Denny was a man of hilarious anecdotes, he was completely unshockable, enormously warm and empathetic, and an abiding support to his family and friends. 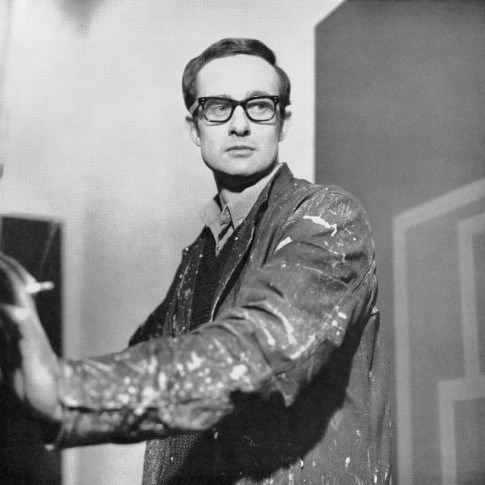