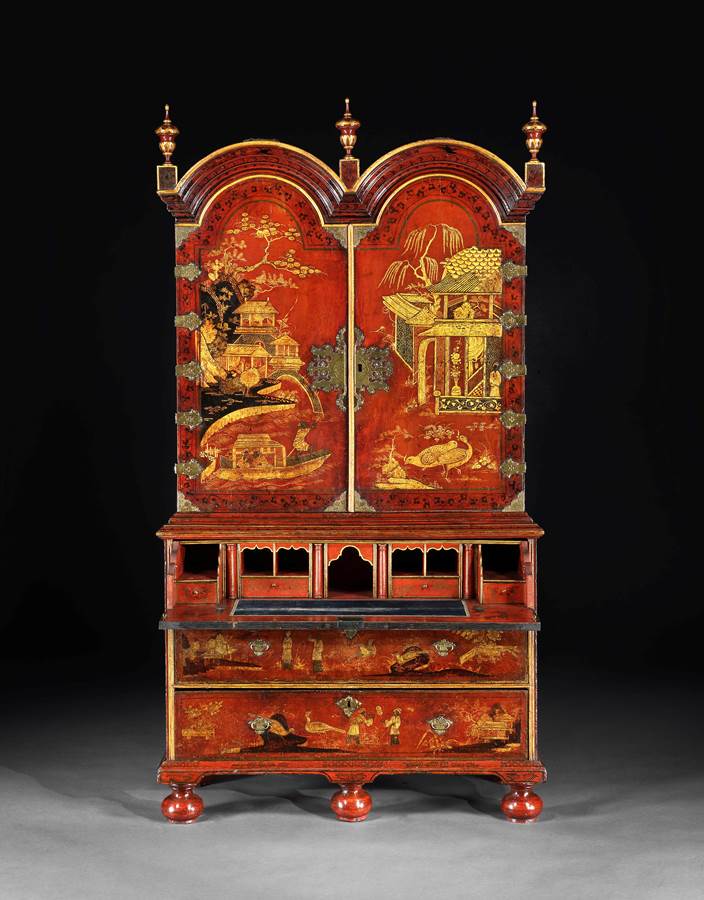 The cabinet with a double domed cornice with three turned (later) finials. The doors elaborately japanned with islands, bridges, temples, boats, birds and figures bordered by a design of trailing foliage. The brass hinges, corner brackets and central lock plate elaborately pierced and engraved. The doors opening to reveal a series of pigeonholes, drawers and shelves.

The lower section with three drawers similarly japanned with figures in a landscape with temples, foliage and birds. The top drawer opening to reveal a secretaire drawer with four small drawers and pigeonholes with a velvet lined writing panel. The whole cabinet raised on original turned and bracket feet.

This cabinet is an extraordinarily rare survival as it retains its original scarlet japanning in an outstanding state of preservation. It also retains the original brassware and the original turned and bracket feet.

Similar examples but in black japanning are illustrated in the ‘Dictionary of English Furniture,’ by Ralph Edwards, fig 29 (The late Basil Oxenden) and ‘Early Georgian Furniture 1715-1740’ by Dr. Adam Bowett, plate 3.82 and 3.83.

Giles Grendey of Aylesbury House, St John’s Square, Clerkenwell, was described at the time of his wife’s death as a ‘great dealer in the Cabinet Way’, and further in 1755 when his daughter married the Royal Cabinet Maker John Cobb as an ‘eminent Timber Merchant.’ Apprenticed in 1709, Grendey who was born in Wotton-under-Edge in Gloucestershire, became a freeman in 1716, by 1726 taking apprentices into his own employ. After his marriage in 1720, he became a freeman of the city of London and was elected to the livery of the Joiner’s Company in 1729.