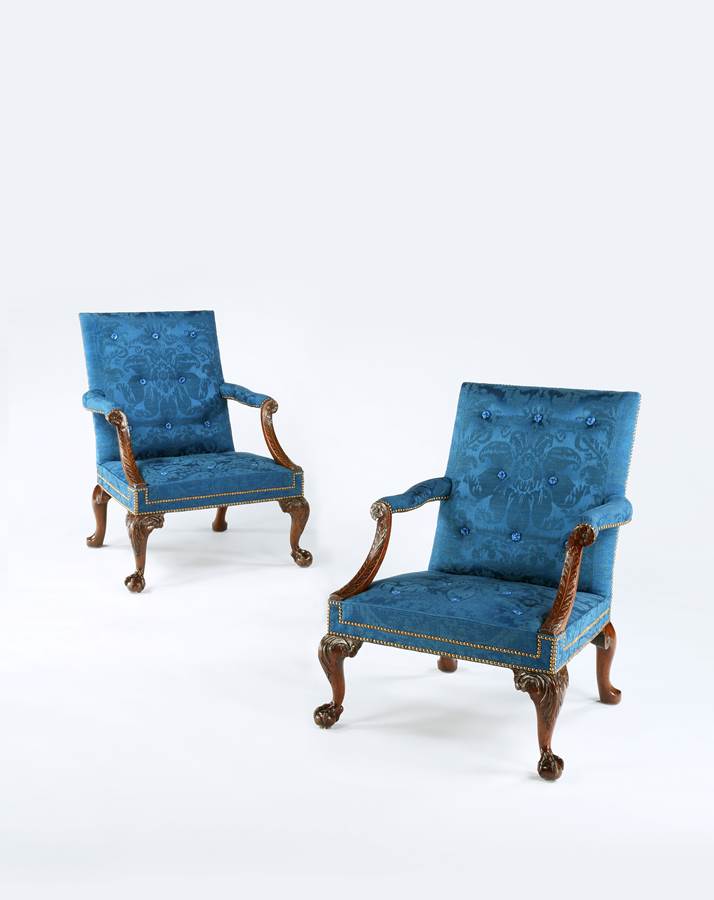 These generous armchairs have been upholstered in eighteenth century blue silk damask of the same date of the chairs. This silk has survived in extraordinary condition, the depth of the colour a remarkable survival, retaining its original lustre and sheen.

The square backs with serpentine padded arms and concave supports, carved with acanthus leaves headed with rosettes. The seat and back upholstered in eighteenth century upholstery silk damask and close nailed on three sides. The two front cabriole legs, carved with acanthus and rosettes, terminating in claw and ball feet. The back legs of similar cabriole form with scrolled ears. Both legs are stamped with the makers initials W.F.

These open armchairs are attributed to Giles Grendey (c.1780) of St. John’s Square, Clerkenwell, based on their close similarity to chairs by this maker. This pair is virtually identical to a set of sixteen in the collection at Stourhead, Wiltshire, the former seat of the Hoare family. The Dictionary of English Furniture Makers, 1660-1840 records that Grendey was supplying furniture from 1746-56 to Sir Henry Hoare at Stourhead.
A pair of chairs of comparable model by Grendey, probably from the set supplied to the Hon. George Shirley (c.1787), fifth son of the 1st Earl of Ferrars (d.1717) from whom he inherited Ettington Park, Warwickshire, bear the same journeyman’s initial stamp ‘WF’ as these, thereby strengthening the attribution to Giles Grendey.
The same ‘WF’ stamp appears on an impressive set of dinning-chairs and almost certainly supplied to John, 1st earl Poulett for Hinton House, Somerset (E. Lennox-Boyd, ed., Masterpieces of English Furniture: The Gerstenfeld Collection, London 1998, p. 110, fig. 85 and p. 208, no. 34). Furthermore, an armchair from a suite of seat-furniture from Gunton Park, Norfolk, is applied with Grendey’s shorter trade label (C. Gilbert, Pictorial Dictionary of Marked London Furniture 1700-1840, Leeds, 1996, p. 243, fig. 437). Other similar chairs were in the celebrated collection of Percival D. Griffiths at Sandridgebury, Hertfordshire (R.W Symonds, English Furniture from Charles II to George II, London, 1929, pp 155, figs 101-102; fig 102 sold as part of the Griffiths sale, Christie’s, London, 11 May 1939, lot 285, and again 7 April 1983, lot 155.) The closest model, with acanthus-carved supports and claw-and-ball feet, to be offered recently at auction sold Sotheby’s New York, 30 October 2002, lot 105 ($89,625 inc. premium). 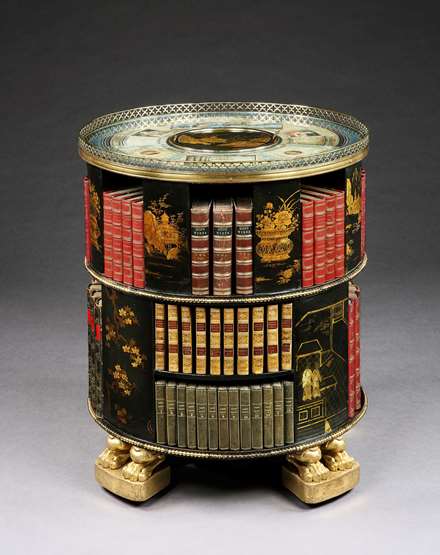 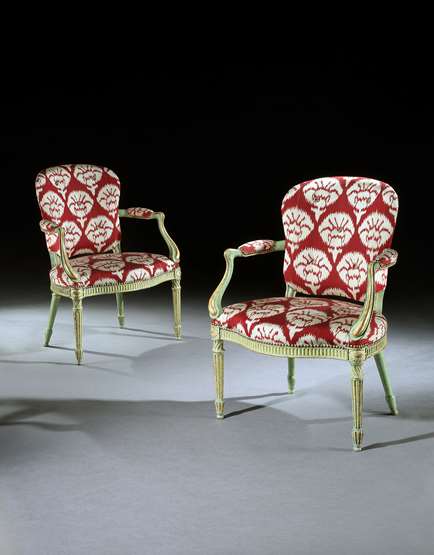