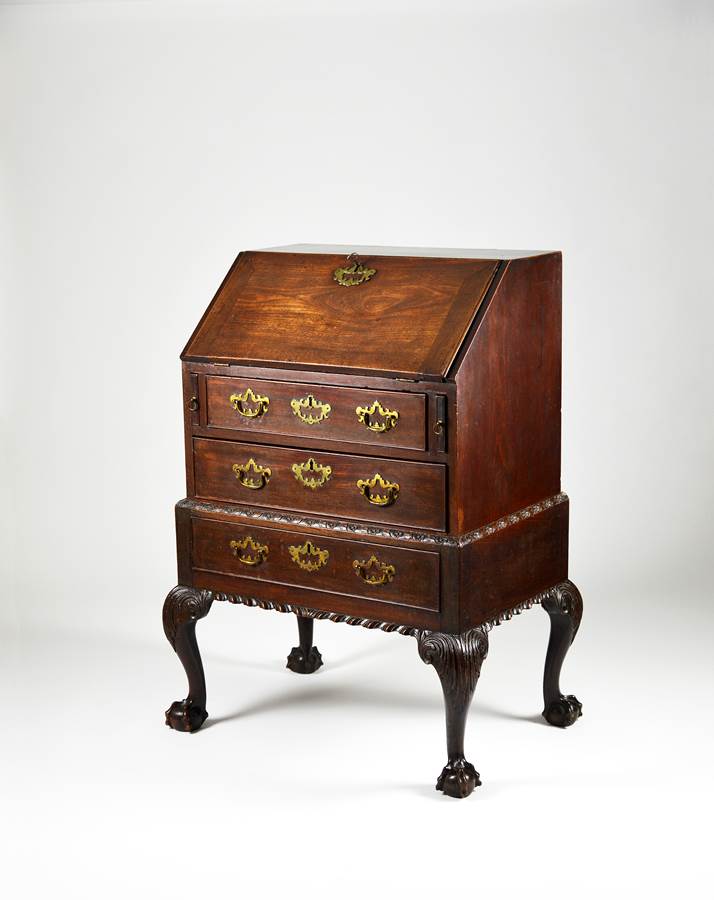 The bureau with cleated fall, opening to reveal an arrangment of drawers pigeon holes and a central panelled door over two drawers, retaining all their original handles and escutcheons. The upper drawer elaborately fitted with lidded compartments and divisions. The base section carved with a ribbon and flower moulding over a further drawer with carved gadrooned apron, standing on boldly carved cabriole legs with scrolled acanthus and ball and claw feet.

This rare bureau on stand is particularly unusual and an extraordinary survival having pased through generations of the same famliy since the 18th century. The condition is outstanding, the colour and patina of the mahogany is a collector's dream and all the handles and escutcheons are original.
Interestingly, the two lower drawers are lined with insurance documents relating to the original owener, William Hucks of Charlotte Street, Bloomsbury from 1777 and subsequently when he had moved to Dulwich in 1788.
The bureau's diminuitive size would have been specifically suited for a London house.

Giles Grendey (1693-1780)
Giles Grendey of Aylesbury House, St. John's Square was described at the time of his wife's death as a 'great dealer in the Cabinet Way,' and further in 1755 when his daughter married the Royal Cabinet Maker, John Cobb as an 'eminent Timber Merchant'. Apprenticed in 1709, Grendey who was born in Wotton-under-Edge, became a freeman in 1716, by 1726 taking apprentices into his own employ. After his marriage in 1720, he became a freeman of the city of London and was elected to the livery of the Joiner's Company in 1729. In 1731, Aylesbury House caught fire and the majority of the building and its contents were almost completely destroyed. According to contemporary newspaper reports, Grendey experienced a devastating loss in the fire, with ‘among other rich and valuable Goods was burnt a Chair of such rich and curious Workmanship… it being intended, to be purchas’d by a person of Quality who design’d it as a Present to a German Prince,’ together with furniture to the value of £1000 which he ‘had pack’d for Exportation against the Next Morning.’ It is clear therefore, from such contemporary accounts, that not only was Grendey’s business as furniture maker a considerable one, but that he also made furniture specifically for exportation. Furthermore, according to Symonds, he is the only English furniture maker, of whom definite evidence exists to support this.


William Hucks of Charlotte Street, Bloomsbury and the Aldenham Baronets

The insurance documents in the two lower drawers of the bureau relate to the bureau's original owner, William Hucks of Bloomsbury, whose house the piece was originally made for. Remarkably, the bureau remained in the family and was moved to Aldenham House, Herefordshire, when Henry Hucks became the 1st Baron Aldenham.

William Hucks (1717-1782) married Eleanor Barnett (1729-1807) and they had twelve children together. Their second daughter, Dorethea Barnetta Hucks (1760-1820) marrived Anthony Gibbs (1756-1828).
Anthony Gibbs was an English businessman, best known as one of the three founding partners in Anthony Gibbs & Sons, a British trading company established in 1802, whose interests spanned trading in cloth, guano, wine and fruit and led it to becoming involved in banking, shipping and insurance. The company was eventually bought by HSBC in 1981 and formed the basis of its insurance broking arm.
Anthony's grandson,  Henry Hucks Gibbs was 1st Baron Aldenham and was also a British banker, as well as a businessman and Conservative Party politician. Aldenham House was build in 1672 for H. Coghill the Younger, but was acquired, renovated and extended in c.1870 by the wealthy Hucks Gibbs, and became the seat of the Barons Aldenham. The estate was sold in 1932 after the death of its then occupant, Vicary Gibbs, however the bureau remained in the family collection.
The house and grounds became a country club and until 1961 when it became Haberdashers' Aske's Boys School. 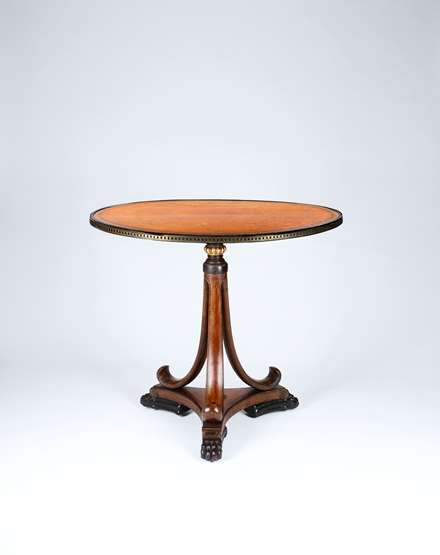